So You Want to Grow Ginseng? Considerations and Cautions

Posted on February 4, 2014 by Sean Westerveld

Ginseng has been grown commercially in Ontario for over 100 years. Acreage expanded rapidly in the 1980’s and 1990’s with many growers transitioning out of tobacco. The annual farm gate value of the ginseng industry in 2015 was estimated to be $275,000,000, making it the most valuable field grown horticultural crop in the province. There has been rising interest in growing ginseng in the past couple of years as prices have recovered somewhat from lows in 2008 and 2009. However, there are a number of things growers need to consider before putting seed in the ground. 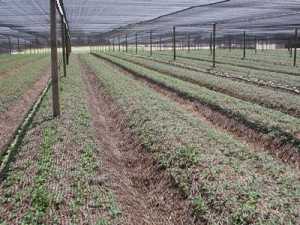 Ginseng has a very high cost of production. The cost to grow an acre of ginseng is around $72,000, and this does not include basic equipment costs such as a tractor and sprayer. Nearly half of the production costs are for establishment, particularly for purchasing and erecting the shade structure. Some production costs such as custom seeding and harvest can be reduced through the purchase of specialized equipment but this would increase start-up costs. The cost of production can be reduced over time as machinery is paid off and materials are re-used.

It takes 3 or 4 years for ginseng to reach maturity, after an initial year of preparation so, 4 or 5 crops need to be established before the first crop is harvested. Consequently, growers would need to invest close to $200,000 per acre before there is any income from the crop. Due to this large investment and associated risk, most growers start with an acre or two of ginseng and increase over time.

Ginseng is highly prone to a number of devastating diseases, including Phytophthora blight, Cylindrocarpon root rot, Alternaria leaf blight, Botrytis blight and Rhizoctonia root rot. Any one of these diseases can wipe out an entire garden in a matter of weeks if not intensively managed. Several additional diseases can also cause considerable damage. In periods of heavy rainfall, diseases can cause major reductions in yield even with intensive management. It is not uncommon for entire acreages to be wiped out by disease in heavy rainfall years. New growers face a higher risk of disease due to inexperience managing these diseases.

In addition to risks associated with disease, wind and hail storms can also destroy the cloth shade, and flooding is also possible.  The greatest weather-related risk to ginseng is likely frost, which has caused considerable damage to ginseng in at least some areas in 5 out of the last 6 years, with heavy damage in 2015. Ginseng typically emerges in early-May, and mid-May frosts can kill seedlings or stunt older plants.  Frosted plants are also more vulnerable to disease throughout the season. Ginseng growers are beginning to use row covers to protect ginseng during frost events.

At present, there is no established crop insurance program for ginseng.  Agricorp currently has a pilot program in place with a limited number of growers to insure the first year of ginseng production, aimed at covering the cost of replacing a damaged seedling garden. Agricorp does have risk-mitigation programs such as AgriStability, Self-Directed Risk Management, and AgriInvest that help reduce financial risks for ginseng growers. Nonetheless, ginseng is a very high risk crop and there is no guarantee of a return on the initial investment.

Many of the soil-borne diseases of ginseng are favoured by high soil moisture. Drainage is the most important factor in preventing disease. As a result, ginseng production has only been successful on sandy to sandy loam soils, with high yields restricted to truly sandy soils. This is the reason that ginseng production is mainly located in Norfolk, Brant and Oxford counties, and small pockets of sandy soil elsewhere. Growers accustomed to clay or clay loam soil often refer to sandier areas of their farms as sandy soil, but true sands are rare outside of the traditional ginseng or tobacco growing areas. Truly sandy soils are similar to beach sand with very low organic matter. A quick test to confirm a sandy soil would be to saturate a small amount of soil and try to form a ball with it. A ball of sandy soil should fall apart easily and none of the particles should stick together.

Furthermore, ginseng cannot be grown on the same land twice due to replant disease. Replant disease is a poorly understood issue that prevents ginseng cultivation on the same land even 40 or 50 years later because of significant soil-borne diseases in the second crop. This has resulted in a shortage of suitable land for ginseng production and increased land lease prices for ginseng. In addition, many growers have to travel long distances from their home farms to their fields, resulting in higher fuel and labour costs.

Ginseng prices fluctuate wildly from year to year. The 15-yr average price for a dried pound of ginseng when adjusted for inflation to 2015 values is $23/lb dried. Prices have been as low as $13/lb (inflation adjusted) within the past seven years. An average ginseng yield on sandy soils would be around 2,400 lb/ac for an inexperienced grower. Experienced growers can get 3,000 lb/ac or more. However, as mentioned previously, yields can be as low as 0 lb/ac when disease destroys a garden.  Yields would be lower on sandy loam soils and much lower on heavier soil types. At 15-yr average prices, even a good yield of 3,000 lb/ac would result in gross sales slightly below the cost of production for a new grower. Collection and sale of seed could also supplement gross sales somewhat, but it is unlikely that a new grower would make a significant profit at average prices.

This is largely why a number of ginseng growers have left the industry within the past seven years. Existing growers compete by planting large acreages, thereby reducing the cost of production, and achieving higher than average yields with their decades of experience growing the crop. Current prices for ginseng have increased, but prices may drop by the time a new crop is harvested in 4 or 5 years as many new acres come into production. When prices are high, the industry tends to plant more acres, but the increased production almost always results in a drop in price shortly after. A general rule of thumb is that it takes at least 10 years for a grower to break even in the industry. This usually requires starting small with 1 or 2 acres and increasing acreage slowly over time, because of the high start-up costs.

Growers interested in producing ginseng are encouraged to do considerable research ahead of time. OMAF and MRA has a number of resources to assist potential growers:

Factsheet – Cost of Production of Ginseng in Ontario:  http://www.omafra.gov.on.ca/english/crops/facts/gincop.htm

Growers are also encouraged to start small with an acre or less of ginseng until they gain experience growing the crop and can ensure that they are able to grow a reasonable crop. Anyone growing more than 0.25 acres of ginseng is required to report their acreage to the Ontario Ginseng Growers Association (www.ginsengontario.com) and pay an annual acreage fee.