While downy mildew is still the predominant disease affecting hops in Ontario, it’s not the only disease growers have to worry about.  Over the last week, we have had several reports of powdery mildew in commercial hop yards across the province.   Powdery mildew was first reported in Ontario in 2014 (see this blog post for that report https://onspecialtycrops.wordpress.com/2014/09/05/powdery-mildew-detected-in-ontario-hops/), however it has not been commonly reported from commercial yards until this year.  Powdery mildew was also reported earlier this season affecting commercial hop yards in Michigan.

Conditions this year in many areas of Ontario have been ideal for the spread of powdery mildew.  Optimal conditions for powdery mildew infection in hops include high humidity, reduced light levels/cloudy conditions and temperatures between 18 and 21°C (although infection can occur between 8 and 28°C).  Unlike downy mildew, powdery mildew does not require free water (wet leaves) to infect and the spores can germinate under high humidity alone.

Despite the similarity in the names of the two diseases, powdery mildew (Podosphaera macularis)  is caused by a completely different pathogen than the one causing downy mildew (Pseudoperonospora humuli), and generally requires different fungicides to control it.  See this earlier blog post for the differences between downy and powdery  mildews (https://onspecialtycrops.wordpress.com/2014/09/05/not-all-mildews-are-created-equal/).

At this time, all Ontario growers should be actively scouting for symptoms of powdery mildew and consider preventative sprays to control the disease Powdery mildew may initially appear on leaves as pale yellow spots which develop into colonies of powdery white spores.

Downy mildew (left) versus powdery mildew (right) spores. Powdery mildew spores are white instead of dark, may appear more “powder-like” and can be found on both the upper and lower leaf surface. 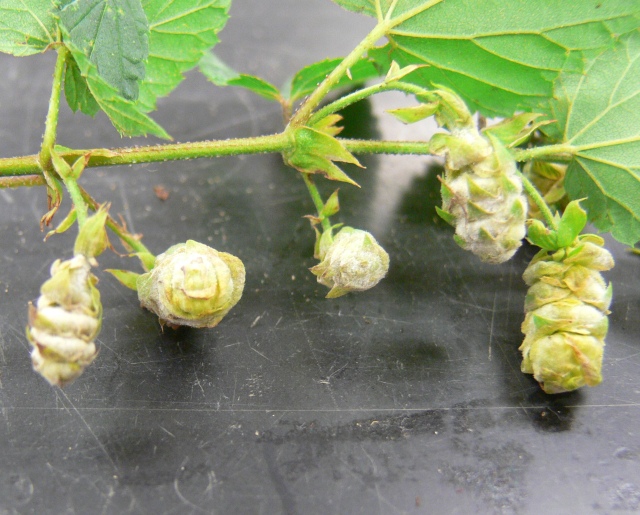 Sporulation on cones is not always obvious. As infected cone tissue dies, it may become reddish-brown, and symptoms may be difficult to distinguish from downy mildew or Alternaria cone disorder, which is common in hops damaged by wind or other mechanical injury.  At the Simcoe station research yard, we have found that Alternaria is often restricted to the tips of the bracts, giving the cones a striped appearance, while powdery mildew is more widespread throughout the cone.