This “Herb  Blurb” article is brought to you by Jennifer Cole, a specialty crop summer student working with OMAFRA and the University of Guelph.

St. John’s wort (Hypericum perforatum) is an herbaceous perennial, which has proven difficult to grow commercially in Ontario. It is primarily used as a treatment for mild depression and is also thought to promote the healing of damaged nerves. 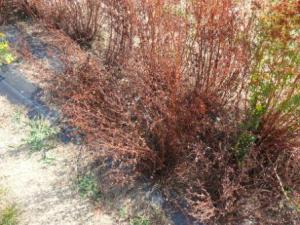 Dieback of St. John’s Wort due to anthracnose

In addition, the Chrysolina beetle carries a pathogen (Colletotrichum gloeosporioides) that causes the disease anthracnose, which results in stem lesions, loss of branches and greatly reduces overall harvest weight.  Recently both Chrysolina beetle and anthracnose have been found attacking St. John’s wort in the OMAFRA Herb Demonstration Garden, established in June 2010, and will likely lead to plant death. As a result of the presence of these pests, it may be difficult to grow St. John’s wort on a commercial scale in Ontario.

For more information on St. John’s wort as well as other medicinal and culinary herbs please visit the workshop. Please RSVP by August 12, by calling Leslie Parks at 1-519-426-7123.

Like Loading...
This entry was posted in Herbs, Medicinal and tagged Diseases, herbs, Insects, Medicinal herb, Pests. Bookmark the permalink.